You would think Easy-Bake Oven is an ancient reference.  But Hasbro still features the oven on their web site with a frenetic video staring a bunch of tween girls that wouldn’t be caught dead using the device.

Unfortunately, the oven is now powered by a heating element and no uses a 100 watt incandescent light bulb (sold separately).   Another victim of environmental correctness.

The earth gets warmer and our toys get colder.

Twinkie Resurrection: Day One, Serves One

According to Wired Magazine:

Polysorbates are made by polymerizing ethylene oxide (a precursor to antifreeze) with a sugar alcohol derivative. The result can be a detergent, an emulsifier, or, in the case of polysorbate 60, a major ingredient in some sexual lubricants.

This makes polysorbates the utility infielder who switch hits and can pitch an inning of relief of organic compounds.

I’ve now exhausted my sports metaphors for the week.

The One With Verne and the Tardis 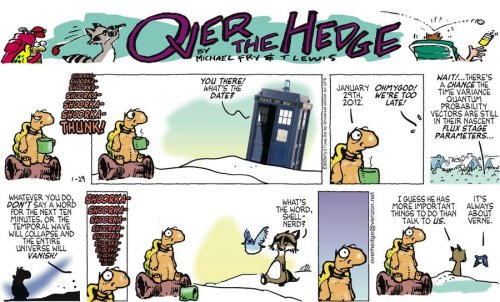 According to several commentators, the Tardis actually makes more of a VWROP-VWROP! sound.

Oh, and thanks for saving the universe, Verne.

According to someone over in the discussion thread at comics.com The Yodeling Spleens were a mid 80’s punk band from Burlington, Vermont.

And as we all know, if it’s on the internet it must be true.

Twinkies actually only have a shelf life of 25 days.*

At the equator the earth spins at 1038 mph.  A sudden stop at that speed would send everything down to the bedrock continuing in motion at 1038 mph.   The only safe place would be at the North and South poles where the spin speed is always zero.   So, in the case of an actual end to Twinkie production we should all move to the poles.

This has been courtesy safety message from the Emergency Twinkie Disruption System.  In the event of an actual emergency you most certainly will be airborne. So, there’s not much point in worrying about it.

I heard this exchange between Ira Glass and Siri recently on This American Life that proves Siri has a pretty subversive sense of humor:

Ira Glass
Siri, where do you come from?

Siri Software
I, Siri, was designed by Apple in California.

Ira Glass
Where were you manufactured?

Siri Software
Good question. Anything else I can do for you?

The above is from the opening to a piece called, Mr. Daisey and the Apple Factory, on conditions in Chinese factories that manufacture popular brand (including Apple) consumer electronics (including the iPhone4s).

Well worth a listen.  Guaranteed to put all your First World problems into perspective.

My logic here is a bit off.  If you’re going to base your monetary system on something (which is a bad idea for a lot of reasons) it should be something relatively rare like gold or silver.   Twinkies are fairly plentiful – at least right now.  Of course, if there were a Twinkie Standard one would assume you’d need to stockpile Twikies in some sort of Twinkie Ft. Knox resulting in at least a short-term shortage.  In fact a Twinkie Standard could require the nationalization of any private Strategic Twinkie Reserve such as RJ’s.  So, perhaps, it’s not completely off base.

Yes, this is two week old news, but this is as fast as we can get to print.  Which must seem ridiculous for those of you reading online. But Hedge is still primarily a print comic, so our deadline fidelity is still to a dying horse-drawn industry in the age of instant cosmopolitans and microwave tater-tots.

The good part in all this is that RJ has been spared the traumatic news for two weeks.  Much like Cora, Duchess of Grantham on Downton Abbey last night was spared the news from the front that Matthew Crowley, the Earl in waiting, was missing in action.   Over the Hedge and Downton Abbey being, of course, so similar in scope and quality that it hardly bears mentioning.

Or as the Dowager Countess might  say, “Both to the manor born.  Though only one be born with manners. “

And sometimes you hit a lazy pop fly that gets caught in the sun and dropped by the shortstop with a Jagermeister hangover.

You’re still on base.  Still in the game.